Home » Le Havre and its region

When visiting the Alabaster Coast in Normandy, Cap Fagnet is a must-see as it offers some of the best views of the cliffs.
You can also admire the whole city of Fécamp and travel in time with the bunkers of the Second World War.
Here is our guide to help you plan your visit: map, tips and photos.

Cap Fagnet is one of our favorite stopovers along the Alabaster coast.
Located just north of Fécamp, it offers :

Below is a short video to give you an idea of what your visit might look like:

More photos after the planning tips.

How to get to Cap Fagnet

Need to rent a car?

Don’t miss the best offers on our favorite platform:

or see our 35 tips and advice for worry-free renting

During the high season there is a snack bar.
Otherwise, you have a good choice of restaurants in the city of Fécamp.

There is no hotel at the cliff top.
The city of Fécamp offers a good range of accommodation with charming apartments for rent, bed and breakfast and hotels. For example:

Chapel of Our Lady of Salvation

The first thing you notice when you arrive at the cape is the charming chapel with its golden statue.
It is closed but you can appreciate the architecture and the exterior style with the colored rocks.

This is what the legend says:

Robert the Magnificent, Duke of Normandy (1027 – 1035) was saved from a shipwreck. He vowed to build 3 chapels: La Délivrande in the city of Caen, Notre Dame de Grâce in Honfleur and Notre Dame du Salut in the city of Fécamp.
After its construction, this one in Fécamp became a rich priory. A part of the surrounding wall can still be seen.

During the 16th century, the chapel was partially and progressively destroyed by the wars of religion. The roof of the nave disappeared and then, the vault was about to collapse.
It was saved, not as a religious building, but as a useful recognition point for sailors, because it was located on a cape.

When walking around the cape, be aware of the noises. Sometimes you can hear three horns blowing from a boat. It is the crew that asks Our Lady to grant them “a good wind and a beautiful sea”.

Plan your unforgettable trip to Normandy!

Bunkers of the Second World War – Blockhaus of Cap Fagnet

Afterwards, the path will lead you to well-preserved bunkers dating from the Second World War.

About the German occupation

Fécamp was occupied by German troops from June 1940 to September 1944.
For fear of invasion, Hitler built a series of protective buildings along the coast (in 1942) called the “Atlantic Wall”.
Some of them were built here. They are reinforced with concrete.
Due to the strategic location of this cape and with a port to defend, the navy built a complex including:

It is a special bunker. It was built to include a Mammut radar antenna, used for long range detection.
It was to be installed on a V143 bunker. However, in 1944, the installation was not completed.
But you can still see the bunker with its 3 concrete blocks above which the radar antenna was supposed to be positioned (a very large antenna, you can see a drawing on the explanation board on the site).

Other radars were to be installed around the Mammut radar. For example, the bunker below was for a Freya radar.

There are many other defensive elements to see around the area. I let you explore and discover them (for example the Tobruk bunker and its holes). Explanatory panels have been installed.

Contact the tourist office for a guided tour of the bunker area.

One of us likes coffee…

Do you enjoy all the free content you find on our blog?
All our tips and practical information, without intrusive ads …

Buy us a coffee!

If you continue walking along the boardwalk past the bunkers, you will reach a viewpoint. It offers a splendid view, as the cape reaches 105 m above the sea water.
On a clear day, the view extends to Yport and Etretat.

From here, you can admire the whole city of Fécamp with :

The valley cutting the cliffs in 2 shelters the Valmont river. It is 14 km long.

The chalk cliffs in this area are about 100 m high. Around Fécamp, as in Etretat, they are mostly white (other colors appear in other regions).
Like most of the beaches of the Alabaster Coast, the beach of Fécamp is made of grey pebbles.

The high cliffs of Fécamp

Then you can walk a little along the cliffs. A portion of the walking path may be closed.
Looking north, all you see is a wall of cliffs. This is very impressive.
Always be very careful. Do not walk to the edge of the cliffs!!! They are made of chalk and are not very stable.
I recommend you bring binoculars to appreciate all the details.

A nature reserve for birds

The area is also protected for its abundant birdlife (Natura 2000). The cliffs and pastures are perfect for birds looking for a nesting place.
Depending on the season, you may be able to spot them:

Above the site, you will also notice the wind farm.
The region is very windy all year round. I recommend that you bring layers of clothing. You never know what the weather will be like.
This is one of my favorite views. Wonderful!

Plan your trip to Normandy!

Cap Fagnet is located on the GR21 hiking trail that runs along the Alabaster coast (179 km, for about 9 days).

The last building you can notice on the Cape is the Semaphore. It was first built in 1906 under Napoleon I. It was established for defense purposes to detect any potential threat arriving by sea.
Today, it is managed by the French Navy (Marine) and has different surveillance roles such as assistance to navigation or regulation of maritime traffic and fishing.

Don’t make the same mistake we did!

On one of our last trips to Europe, a hacker stole our credit card details while we were using a hotel WiFi.
So our trip started with a “blocked card” call… Not funny at all!
Learn from our mistake, make a small VPN investment to surf without worry. Bonjour, we are Claire and Manu, sister and brother, and we have been publishing travel guides around the world for 9 years. As true lovers of the beautiful regions of our country, France, our ambition is to bring you all the information and inspiration you need to make your trip there a success.
Let us be your local guides to awaken your senses in Normandy! Discover the story behind the blog 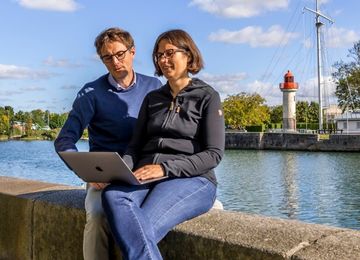 Bonjour, we are Claire and Manu, sister and brother, and we have been publishing travel guides around the world for 9 years. As true lovers of the beautiful regions of our country, France, our ambition is to bring you all the information and inspiration you need to make your trip there a success.

Let us be your local guides to awaken your senses in Normandy!

Discover the story behind the blog

Do you like all our tips for planning an unforgettable trip?

Do you find it refreshing not to have intrusive ads jumping around?

More about Claire, Manu, and the blog
Contact us

Other regions to discover

Legal notice / Terms of use / Privacy policy
Normandielovers.fr is a participant in the Amazon EU, US, UK and Canada Partner Programs, affiliate programs designed to allow sites to earn money by linking to Amazon.

Avant les plages et villages... parlons cookies !
We share everything with you: our favourite places, our tips, our good plans... and without invading you
with ads! To bring you the best possible site, cookies are an essential ingredient. Do you accept them?